Tree Warden of the Year

“The Swifty” Award, In Memory of Seth H. Swift

The Tree Warden of the Year Award recognizes a tree warden who exhibits leadership, dedication, and a commitment to the profession. The annual award is named in honor of longtime member and past president Seth “Swifty” Swift, who passed away January 1, 2004. The association invites nominations from Massachusetts residents as well as from city and town officials. Nominations are due by December 1st for the January annual award presentation. Now – at any time of year – you can nominate online.  Read on to see the award criteria:

The award is given at the Association’s annual conference in January. The MTWFA holds an Arbor Day event in the town or city where the individual works and publicizes the award in that recipient’s area. 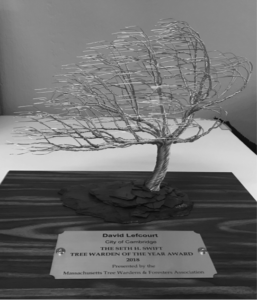