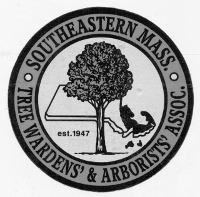 Beginning in March 2018, Southeastern Mass. Tree Wardens and Arborists Association (SEMTWAA) will hold its quarterly dinner meetings at the Boston Tavern in Middleboro.  The next 2018 date is March 14 . Advance reservations are required, generally two days before the event. For information, email semtwaa@gmail.com.  The Southeast Tree Wardens’ & Arborists’ Association also holds an annual field day and equipment show on the 3rd Thursday in September.

The Southeastern Massachusetts Tree Wardens’ and Arborists’ Association (SEMTWAA) was organized in 1947 as a satellite organization of the MTWFA. In that era, there were five or six similar groups representing various regions of the state. Each arranged its own programs and considered subjects of local interest. Until 2015, when the Western Mass. group reactivated, SEMTWAA was the only such group still in existence. It is now an independent entity with its own officers and board. A Plymouth County representative and several other SEMTWAA members serve on the MTWFA board, ensuring communication and cooperation between the two associations.